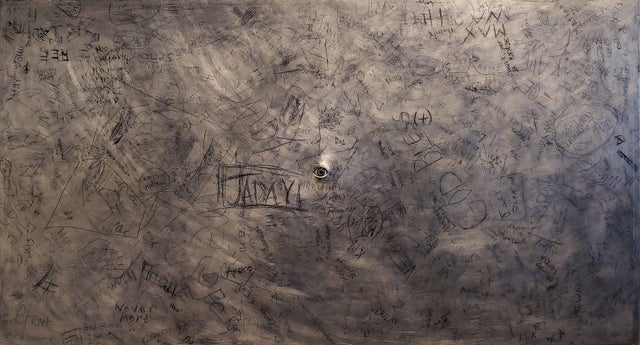 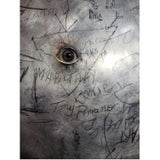 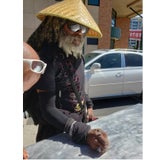 The EYEPANELs "Collective Conscience" is part of the EYEBOX series based on conscience. This work is about community, in the sense, the marks all share the same space on the panel, much like people in a city. Presenting the panel to a broad audience; schools, VA medical center, soup kitchen, Firefighters memorial, city streets, parks, a police station, a skate-park, local newspapers, the list goes on. Within a months period speaking about the concept and inviting individuals to scratch whatever they are moved to add to the surface. The form of the eye can represent the energy of each person who chose to leave a mark or not or represents the collective energy as a whole. Spaces also represent those who didn't engage. The social interaction was interesting to see, most wanted to write something, a third of those didn't know what to write, but the ones who did went straight to work. I was invited to attend morning lineup at the police station, it felt like I was back in school at "show and tell", standing in the center of u-shaped table arrangement, a third of the lineup was into the idea of the work. Later in the break room a detective wrote, but would not let me take a picture, most didn't mind, surprising I could in lineup room. As I was on my way out, I stopped by a small office with three women who work with sobriety and driving with awareness, while they were writing I thought to ask about if someone from Graffiti removal team was available, a person who just scratched something went off to see, sadly they were out of the office.

Later at the soup kitchen it was slow to start, I received the same stares as the police gave me...human nature. But the ones who wanted to write didn't pause. I experienced a role reversal while asking if people coming or going from the kitchen wanted to write something, some would avoid eye contact or profanely say no, just as people treated them on the street. The skateboard park was a great experience, the only other group that was as motivated were firefighters at the national assembly in Memorial park. Anyway, some of the skaters already had something to scratch the panel on them. One wanted to do a kick-flip on the panel( check the video below).

My approach was to ask if they would like to write " whatever you want". It was important not to interfere as if it was an object in public that had been written on like old playground structures, a picnic table, or a bathroom stall. Before the surface was waxed it was difficult to see what had been scratched on the surface, so it was easy to write over previous entries. Overlapping entries are the beauty of time and society, some scratched lightly, others deep mimic the reality of society. The black wax revealed the slightest scratches and filled in the deep grooves, it reminds me of the look of transferred marks through carbon paper.

Please contact us for orders out side continental united states.