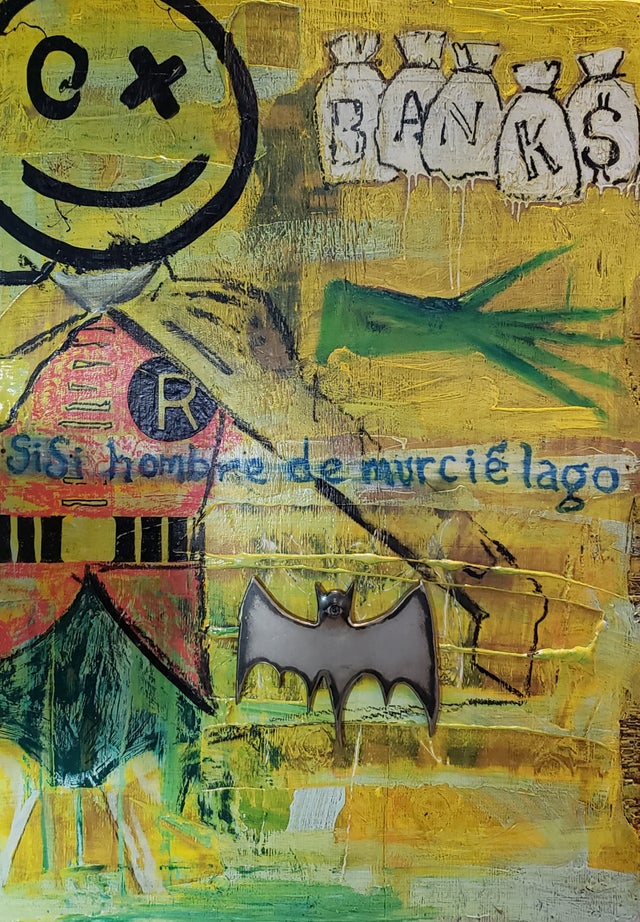 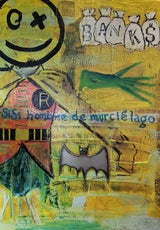 ROBBIN BANKS came about one day as I was browsing Instagram and @mmurrmur (retna) posted about a Banksy piece......within minutes I ran across this @basquiat_archive post of a Basquiat painting. The idea started to form.

I see tons of images about superheroes, somewhere in the back of my mind I wanted to create something with a comic book feel, but it had to have some connection to my experience.

Thinking about the Basquiat painting, the 1960's Batman show, Banksy's 2013 visit to NYC, and memories of t-shirts of my 1970's childhood.

The oddly corny yet rich character of the Batman show referenced in Basquiat's paintings. Solidified how I wanted to depict the superhero in my mind. Robin, batman's assistant who I always thought came from the Robin Hood character of the Sherwood forest. Both being secret helpers to the people.

Banksy, I return to his visit to New York, the sphinx sculpture overlooking a puddle of water and the nazi officer contemplating on a bench near a mountain lake, bought and returned to a thrift store. The idea of how Banksy functions is much like Robin Hood, funneling money from the rich to those with less, by placing his work in public, as attached or unattached assets.

The Bat: my first thought about Basquiat's painting, is how similar my EYEBOX series mirrored this idea. I made an EYEPANEL of a bat to pay tribute to Basquiat, and Batman, and the eye itself closely related anatomically to Retna. Formed and welded from 16 gauge cold rolled steel, this object hints at the other half of the duo, without overpowering the prominence of Robin. Robin (Dick Grayson in the 1960 Batman series) to me felt like he held the line for Batman. The innocent who reminded Batman to make a good example with his actions. The idea of Robin protecting Batman morally is shown in this work by holding the Bat under his wing so to speak.

Yellow has a strong sense of what Batman was, somehow the color in my mind is a trademark of Batman's image, at least in my child's mind. Seeing the Basquiat painting flooded in yellow, was only obvious to me. The Bags of money also are derived from the corny props in the early series. Which tie the feeling of bad guys and bank robbery in with the main focus of the work robbing banks, titled "Robbin Banks".

This is an explanation of the thought process, symbology, and focus of the work, below are process images, and the posts which started the process of development for this piece.

Please contact us for orders out side continental united states.